As an author, historian, and educator, Tim strives to find creative ways to engage diverse audiences with history and to demonstrate the relevance of the past.

In his writing, Tim draws from his experiences working as a public historian for over twenty-five years. His career has included positions at the Smithsonian National Portrait Gallery, the Smithsonian National Museum of American History, the Smithsonian National Air and Space Museum, the Missouri Historical Society, and the Colonial Williamsburg Foundation in Virginia.  During the Lewis and Clark Bicentennial 2004-06, Tim helped develop the national exhibition which traveled the country.  He is listed among the history field’s “most engaging, innovative, and entrepreneurial leaders,” and profiled in the book Leadership Matters (Rowman and Littlefield Press, 2014).

Tim’s career memoir, A Grizzly in the Mail and Other Adventures in American History (University of Nebraska Press, 2014), highlights some of the fun projects he has worked on. More recently he has been writing history-focused nonfiction books for ages 10-14. His book First Flight Around the World was a finalist for the 2016 YALSA Excellence in Nonfiction award. Tim’s books incorporate a variety of primary source materials and teach students and educators the historical thinking process — critical thinking, multiple perspectives, historical context and weighing sources. He strives to write books that teachers will want to use in the classroom.

Tim has been published in the Journal of American History, Perspectives on American History, History News, Gateway Heritage, Chesapeake Bay, and Air and Space magazine. He co-authored The Museum Educator’s Manual (now in a 2nd edition) and originated and wrote the History Bytes column in History News, a quarterly publication of the American Association for State and Local History where he is active on various committees. Tim has taught classes about museum practice at Webster University in St. Louis and the University of Turabo in Puerto Rico and regularly speaks to university classes around the Washington, D.C. area and beyond.   He received the 2008 Smithsonian Education Achievement award, graduated from the Smithsonian Palmer Leadership Development Program, and helped found the  History Relevance initiative (historyrelevance.com). Tim holds a master’s degree in history from George Mason University.

Lancaster, Pennsylvania – home of the Conestoga wagon and the Pennsylvania rifle, as well as U.S. President James Buchanan – is Tim’s birthplace. As a child, he dragged his parents to historic sites up and down the East Coast. Tim enjoyed living for several years in Philadelphia while in college and in London for a semester. Except for a three-year stint in St. Louis, he has called Virginia home for his entire career.

Tim Grove believes the past is filled with amazing stories waiting to be told. His writes from twenty-five years of experience as a public historian and museum professional, working at some of America’s most-visited history museums. His career memoir, A Grizzly in the Mail and Other Adventures in American History, highlights some of the fun projects he has worked on. More recently he has been writing history-focused nonfiction books for ages 10-14. His book First Flight Around the World was a finalist for the 2016 YALSA Excellence in Nonfiction award.  Besides telling stories from different perspectives, he seeks to help all ages understand the historical process and to see that the past is vitally relevant to our world today.

Up next: April 12, 2022. The World Turned Upside Down: The Yorktown Victory That Won America’s Independence. 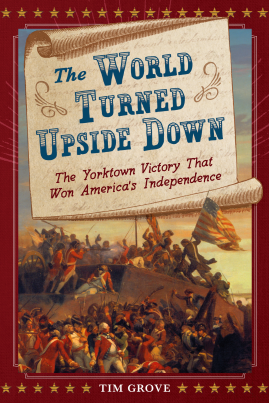